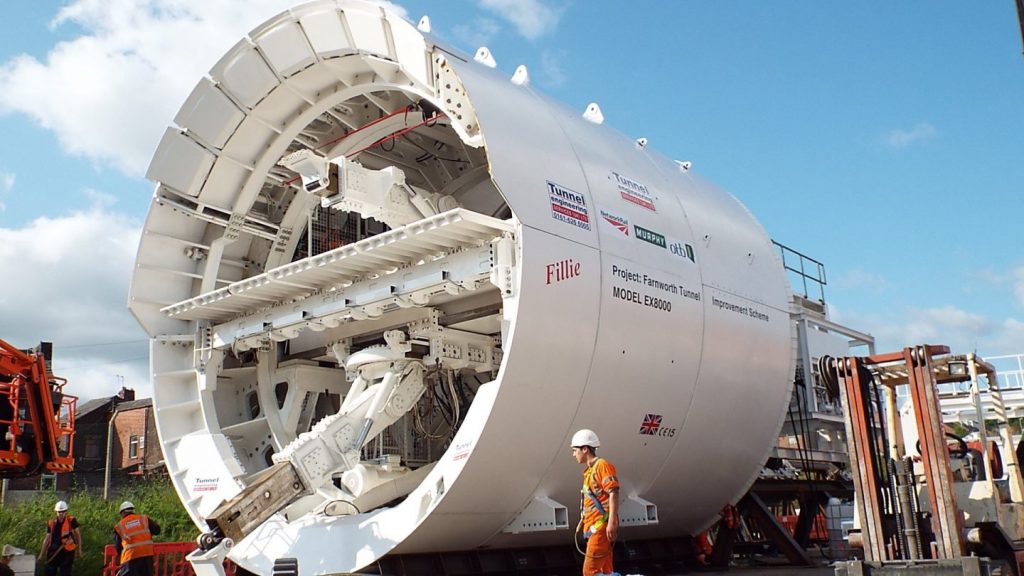 Tunnel Engineering Services (UK) Ltd (TES) recently provided a specially designed tunnel boring machine (TBM) in support of the Network Rail route electrification project between Manchester and Preston via Bolton which when completed will electrify one of the North West’s busiest routes and allow faster trains with more passenger space.

As part of the construction works there was a requirement to reconstruct/enlarge the Farnworth Tunnel which is on the line about 4 km southeast of Bolton. The reconstruction was required because the original tunnel size would not allow the installation of the new overhead power lines required by the new trains. As well as the tunnel rebuild some 1,600 m of track through the area also had to be lowered to ensure smooth running of the electrified rail line.

The original tunnel was constructed in the mid-1830s and runs over a length of some 270 m. The construction comprises a mix of brick and stone lining with stone portals through a mix of ground conditions.

Prior to the electrification reconstruction works commencing, over 1,500 ground investigation bores were made to establish what ground types would need to be handled by the tunnelling machine during the excavation operation.

After examining the market, TES was approached as the potential TBM manufacturer with a brief to design what ultimately proved to be the largest TBM ever constructed in the UK.

The TBM, named Fillie, had to bore a new 270 m long tunnel, removing some 30,000 tonnes of material and install 1,940 concrete lining segments to complete the new tunnel. Work started at the site in March 2015 in preparation for the arrival of the TBM.

Prior to works starting, construction of the TBM itself was something of a challenge. Having to excavate the original tunnel with Victorian interlocked solid stone work, brick lining and the surrounding ground meant that the design had to be not only durable to enable the very hard stone work to be removed but also flexible enough to enable excavation unit changes relatively quickly and easily as the ground conditions changed during the tunnel advance.

The location and proposed route of the new Farnworth Tunnel was such that it effectively required the removal of pretty much all of the existing tunnel alignment and also required the excavation for the new tunnel to at times pass very close to the original smaller diameter Farnworth (running) Tunnel that was built in the early 1830s.

Because of these proximities it was decided that a full face TBM would not be appropriate for this drive. After careful consideration of the predicted conditions both for ground and tunnelling works, TES, in co-operation with the team from tunnelling contractor J. Murphy & Sons Limited (Murphy), ultimately designed the 9m outside diameter open face shield, with leading edge ‘forepoling’ boards for initial ground support at the face, that utilised centrally-mounted twin mining booms that could each carry a roadheader drum cutter and/or a bucket excavator. In the event, despite not having been initially designed for this use, ground conditions meant that booms were also utilised with a combination of hydraulic breaker and bucket depending on the ground type encountered.

TES received the first enquiry about a possible tunnelling machine from Murphy in November, 2014. The initial brief was that the machine would need to handle foam concrete, solid stone brick and what was believed to be softer ground types along the tunnel bore route. In barely one month an initial design for the excavator-based TBM was presented and Murphy agreed to proceed, provided the unit was ready to be on site no later than July 2015. 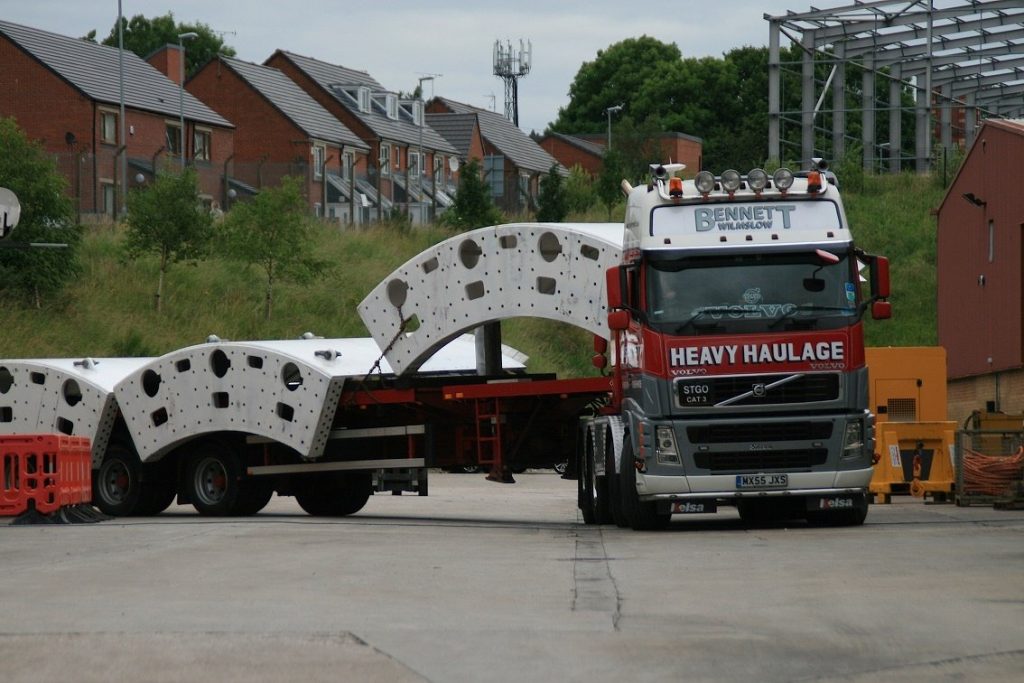 In just seven months by July 2015 TES had completed the design, built and completed testing on the shield section of the tunnelling machine. By the end of July, whilst TES was finalising testing of the segment lining erector in the yard, engineers from Murphy were dismantling the front end of the shield alongside TES engineers for transport to site. The complete unit was ultimately dismantled at the TES yard in just two days. At the Farnworth Tunnel site, in association with TES engineers, Murphy rebuilt the whole machine in just 5 days. The machine commenced tunnelling immediately on completion of the build.

Whilst the machine was under construction, from March 2015 Murphy had commenced preparation works with the construction of the launch portal for the TBM and filled the old tunnel from end to end completely with 7,500 m3 of foam concrete. This was intended to provide support as the old tunnel and surrounding ground as it was excavated. Despite the more than 1,500 test holes drilled to investigate the ground conditions the drive actually encountered far more sand than was predicted.

The excavation removed all of the old tunnel, upsizing the diameter by some 2 to 3 m to 9 m o.d. The route ran mostly on the line of the old tunnel which included an existing curve. The new tunnel curve however was not as tight as the old one to allow the new route to handle the newer trains. However, the new tunnel route passed very close to the alignment of the Farnworth (running) Tunnel, passing by with as little as 2 m clearance at times.

As well as removing the old tunnel, the new route also required the invert of the old tunnel to be excavated because the upsizing of the existing tunnel was confined vertically due to limited ground cover over the drive. However, once the new track is completed the track horizon is not expected to be much lower than the old track.

At the start of tunnelling works the excavator booms were fitted with roadheader drum cutters which were used to cut through the old tunnel headwall. The high stone strength caused significant vibrations when cutting which meant that the use of the drum cutters had to be limited. So, once sufficient of the headwall was removed it was decided to exchange the drum cutters for a hydraulic pick units or peckers to limit the impact of excavation vibrations on the machine structure. Whilst the original TBM design did not take into account use of peckers the interchange was made possible with minor modifications so the tunnelling process could proceed. However ground conditions deteriorated into running sand at times which caused delays as Murphy had to inject ground stabilisation resins ahead of the face.

This was also a necessity where the tunnel ran beneath the alignment of the A666 road. As the tunnel passed beneath the road, the surface experienced some anticipated subsidence. However plans had been put into place should this occur and the road was resurfaced back to its original level during an overnight operation with minimal, if any, disruption to this busy traffic route.

It proved possible to safely excavate while concurrently installing and grouting sections of the tunnel wall as was originally planned. At one other point in the excavation a running sand inrush occurred with some 100 t of sand burying the machine face. This caused a further delay as the site had to be open cut using a shaft to re-stabilise the ground over the TBM face. However the remedial works worked very well and despite the ground problems the TBM completed the new 270 m tunnel on 30 October, 2015. 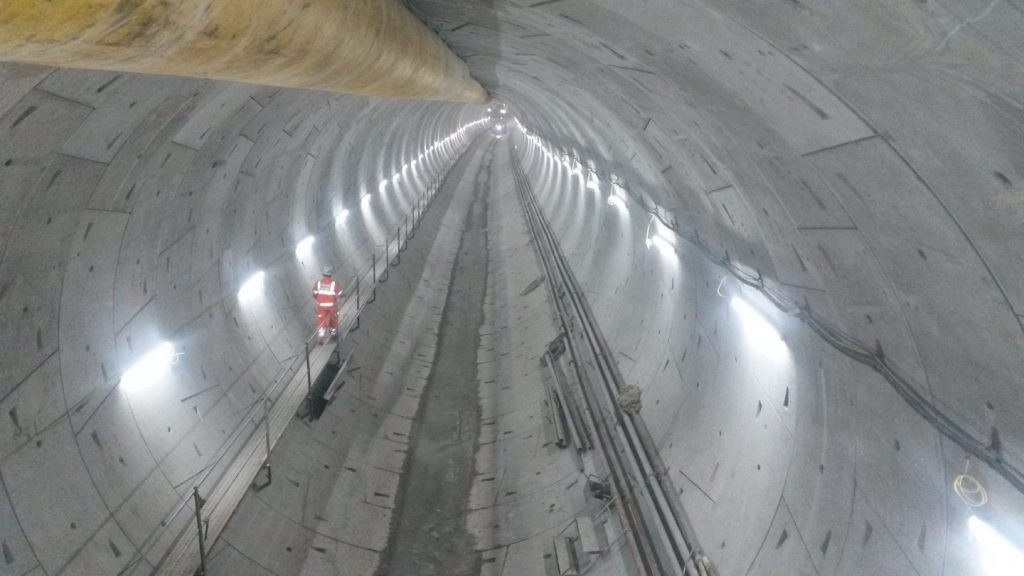 Commenting on the project from the TBM manufacturer’s viewpoint Geoff Clarke, Managing Director of TES said: “This perhaps is one for our own record books! From the date of the first enquiry back in November 2014, through design, build, test, delivery, commissioning, tunnelling, holing and scrapping of the TBM at the end of the project, the whole thing was completed in less than 12 months from start to finish. This was despite the fact that as far as we know this is the largest tunnelling machine built to date in the UK. This was an excellent job all-round in the time frame available and it was only possible due to the time and effort of our TES team working in complete concert with the Murphy team over the whole project duration. This was not always the smoothest running project but it does show what British engineering can really achieve when it needs to whatever the conditions!”

Mick Boyle, project manager for Murphy said: “The tunnel has now been secured for many decades, providing a more efficient railway for Network Rail and passengers. This has been an exciting project to work on, especially with the TBM, and demonstrates the skills of our team and the effectiveness of our partnership working.”

For Network Rail Nick Spall, Route Delivery Director London North West Infrastructure Projects said of TES’s involvement in the Farnworth Tunnel project: “On behalf of Network Rail I would like to express my thanks to the entire team at Tunnel Engineering Services for the sterling efforts over the past few months to develop and manufacture the Farnworth Tunnel Boring Machine. The attitude and efforts of your team have played a significant part in helping to ensure the successful delivery of the Farnworth Tunnel project as we have strived to create a one team ethos amongst all the key players, something clearly embraced by your organisation.”

The new section of electrified rail line was fully operational by mid-December of 2015. 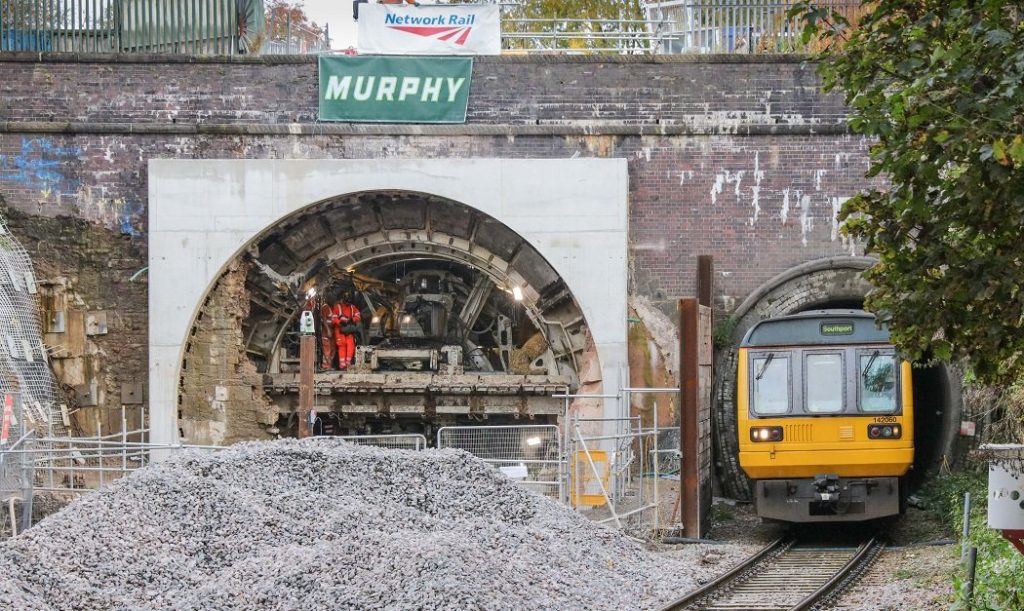 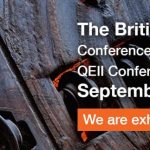